Getting a Better Sleep Part 3

I say “managing nightmares” because there is no such thing as a cure for nightmares. Nightmares can serve many purposes in our lives. Issues that need to be dealt with immediately can come in the form of nightmares so we can deal with them in our sleep. Other times our subconscious has messages for us that we have ignored, so a nightmare is the only way to get our attention. Most commonly, people with persistent nightmares may be suffering from PTSD. We cannot banish nightmares completely, but we can help ourselves so they are not occurring night after night after night.

I’ve been plagued by nightmares since infancy. I had hallucinations as a child as well. I was awake but I would see images from my nightmares in my waking state. From childhood, I remember very few nights that were peaceful and restful where I did not wake up sweating and filled with terror.

The “Nightmare” (AKA Mare) is believed by many cultures to be a type of demon. Some cultures link them to the Incubus and Succubus from what I can tell, because of the way they attack.

While we’re asleep, it is said that we are weakened and vulnerable. The Incubus/Succubus, like the demon, take advantage of us while we sleep for this very reason.

The demon (Mare) is thought to cause sleep paralysis and sudden death.

“In the most extreme examples, an Old Hag Syndrome “attack” involves a sleeper, who upon waking, immediately recognizes his surroundings but is unable to move. Some people report seeing a dark mass, sometimes a human-like figure, moving toward or over them and finally coming to rest on top of them. … Within a few seconds, sometimes as long as a minute (though the seconds may seem like hours to the panicked “victim”), the dark cloud or figure dissipates and the dreamer once again regains his powers of mobility.”

Some people view this as a supernatural phenomenon while others see it as a normal brain function. It is up to you to decide why this is occurring. 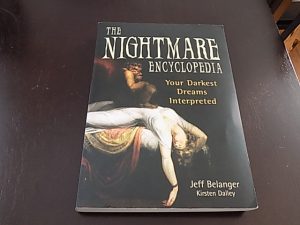 I am visited frequently by “The Old Hag” though in my personal experience I feel the weight of the entity on me, not allowing me to breathe but it is in fact invisible to me.

Sleep paralysis happens to everyone during REM sleep. This is when our most “active” dreaming takes place. To prevent us from moving around while sleeping and thus preventing harm to ourselves. We have a relay station at the top of our spinal column that basically “disconnects” us from our motor cortex, paralyzing our bodies; the exception being mainly our lungs and eyes.

There is a sleep disorder that is referred to as “Sleep Paralysis” where people are completely paralyzed just before entering or after leaving sleep. This is a scientific explanation of “Old Hag Syndrome”.

I often wake up from a dream and I cannot move. Because I am awake, I can remind myself that it is normal and there is nothing to worry about. However, my dreams are so vivid I can rarely tell dreams from reality. Even later in my day, there are moments when I can’t be sure that I am awake. Most often what occurs in my dreams is I “wake up” in my dream and cannot move. The invisible force bears down on me and I feel like it is trying to kill me by smothering me. I can feel the malice in every inch of my body. I scream and of course no sound emerges, I obviously can’t move so I can’t fight it off. All I can do is scream inside my head and beg the Goddess to save me from whatever this is. Then I “wake up” again, and the cycle repeats a few more times until I am truly awake. I am attacked once more while actually awake and then it leaves and I can move. It is at this point I have a full blown panic attack. I can clearly understand why some cultures believed people died of fear in their sleep. It would also account for what is called Sudden Unexplained Nocturnal Death Syndrome (SUNDS). I wonder if there is a link like this for Sudden Infant Death Syndrome (SIDS) as well. Hmm… more research for another day.

As I said nightmares often occur because we are ignoring messages and the nightmare forces us to pay attention. Many dream interpretation books do not address nightmares, so interpretation is difficult. This is why I love “The Nightmare Encyclopedia” By Jeff Belanger and Kristen Dalley. Not only is it good for interpreting dreams but it also goes into things like nightmare myths, folklore, and the science of sleeping along with fictional literature that stemmed from nightmares. It’s quite fascinating.

The very best thing you can do to help interpret your dreams is to write them down. Keep a pen and paper handy on the night stand so you can record them before they vanish from your memory. The next day take a look at what’s going on in your day to day life, your emotional state, recent life changes, things you’re struggling with etc. Even questions you have asked from the Universe. See if there are any correlations that would make sense. Use a dream interpretation book to help you. It is also good to go back and read older entries and see when the nightmare stopped occurring and look at reasons why. Then you can begin to determine if your nightmares are messages, your subconscious working out problems or if you are suffering from a trauma.

May you find the path to peaceful sleep.