The Enchanting World of Fairies

I am relatively new to the exploration of fairies. I never felt their presence in any of the places I have lived. However, now that I am living in the middle of a forest, I feel them more and more. So here is a very basic introduction to the world of fairies.

If you have a blog post or article or website that delves deeper into this enchanting subject please leave a comment or email me and I will post/link to you.

I began my exploration into the world of fairies when I began planting seeds in my greenhouse. I had a feeling come over me that I needed to find out more and incorporate some fairy magick into my practice. I looked up appropriate offerings first so that I could leave something out for them in the greenhouse. From what I found one of the favourite treats of fairies is cream and butter. They also like sweets like cake. I have also put out honey and agave nectar. I later found a bottle top in my yard when I was cleaning and have decided that is the perfect way to put out some water for them. I found a small china teacup at a flea market also and that s where I place the food offerings. 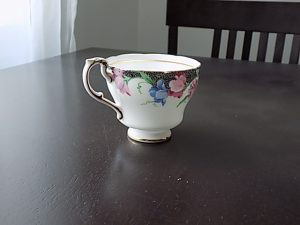 Some people are creating entire gardens dedicated to fairies. I find this fascinating and will be exploring this further.

If you look into fairy folklore you will find that the term “fairy” means many different things to many different cultures. Some use the word to describe creatures or spirits, others use it as an adjective to describe “enchantment”.

Many folks say that fairies have their origins in Celtic traditions. However, there is much discussion that fairies have origins in many other traditions. I won’t go into this too much as I am sure there is fairy folklore for just about any tradition and culture in some form or another. I always encourage people to research their own beliefs first and reconcile if that is what makes sense to them and to then compare other cultures stories and lore.

Here is a quote from Wikipedia that I feel is a good introductory description for fairies.

Fairies are generally described as human in appearance and having magical powers. Diminutive fairies of one kind or another have been recorded for centuries, but occur alongside the human-sized beings; these have been depicted as ranging in size from very tiny up to the size of a human child. Even with these small fairies, however, their small size may be magically assumed rather than constant. Some fairies though normally quite small were able to dilate their figures to imitate humans.

Wings, while common in Victorian and later artwork of fairies, are very rare in folklore; even very small fairies flew with magic, sometimes flying on ragwort stems or the backs of birds. Nowadays, fairies are often depicted with ordinary insect wings or butterfly wings. In some folklore, fairies have green eyes. Some depictions of fairies either have them wearing some sort of footwear and other depictions of fairies are always barefoot.”

After Christianity took over fairies became “evil”. This brought on new superstitions of how to repel fairies and protect oneself from them. Along with the belief in Changelings (a fairy child that would be let behind when a fairy stole a human child), more protective charms were created and employed to protect children. We now know that people used the concept of the Changeling to explain children who suffer from birth defects.

There is an almost equal divide in opinions regarding the acknowledgment of fairies. Some argue that saying thank you implies that you thing you are better than them and they are servants of some kind. Others argue similar to that point that by acknowledging their presence at all will make them angry and they will then become malevolent towards you. The flip side is that people believe that we should acknowledge and say thank you to fairies as we set out our offerings and the fairies will appreciate the acknowledgment of their generosity.

As I am only now exploring the fairy realm I am not yet sure which side of the fence I belong. I have always been a believer in showing gratitude to all beings that have helped me, yet I also would never want to insult someone either. Does leaving an offering without words of gratitude show appreciation all on it’s own? If so is this the appropriate way to thank fairies?

I would love to hear your thoughts and opinions on this subject. Please lave comments or email me. I think this could be a very fascinating discussion!

It is believed that fairies want to show themselves to us. However, there are a few caveats. One must be open minded, environmentally conscious, and approach the fairies with only the best of intentions. Failing this, you will never see a fairy ever.

You may stumble across fairy rings from time to time. I am sure most of us have seen them at least once in our life. We may not have known it to be a fairy ring at the time, or even believed in fairies at the time, but still we have seen them. Think back and see if you can remember a time when you came across a fairy ring. You may have dismissed it as a just a part of nature’s quirkiness or not really registered a thought about it all. Now though, you can look back and see it in memory to relive the sighting. If you are reading this, chances are you will now be on high alert to not miss out on seeing one and thus spotting a fairy. Fairy rings usually consist of plant life such as flowers, trees, grass etc. Naturally formed circles of rocks are also believed to be fairy rings.

In Ireland it is believed that sacred wells are protected by certain types of fairies. (Among other spirits). Water fairies are typically associated with wells and springs.

Among your offerings to fairies, leaving a thimble of water out is wonderful because the fairies like to drink from it and bathe in it. Fairies in general are attracted to water so having a water feature in your yard is a great way to have fairies inhabit your space.

If you sit very quietly and stay very still you may be able to spot a fairy. While folklore suggests you should never enter the fairy ring, lest you never be able to leave, it would be very nice to be able to experience fairies first hand. Good luck! Let me know how it goes!